One of my favorite movie monologues of all time is Meryl Streep as Miranda in The Devil Wears Prada.  If you haven't seen this fashion forward flick, please do!  It is a thoughtful story line on the demanding & cut-throat lives of those in the limelight of fashion.  At the very least you will appreciate the Oscar nominated wardrobe design.  To further prove my last blog entry Gaga for Gaga Miranda (Meryl Streep) without prevarication describes the trickle down effect of fashion (from the haute couture elite to the discount racks of TJ Maxx) to her newest & very naive assistant Andy (Anne Hathaway).  And, if you haven't seen it (or even if you have) declare tonight a chick night & rent the flick! 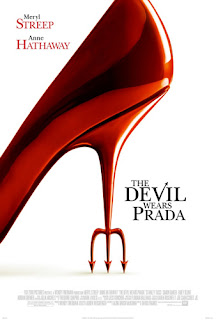 For the more visually inclined:
Meryl's Monologue
Or if you are more of a reader:
(Miranda and her assistants are deciding between two similar belts for an outfit. Andy sniggers because she thinks they look exactly the same.)
Miranda Priestly: Something funny?
Andy Sachs: No, no, nothing. Y'know, it's just that both those belts look exactly the same to me. Y'know, I'm still learning about all this stuff.
Miranda Priestly:  This... 'stuff'? Oh... ok. I see, you think this has nothing to do with you. You go to your closet and you select out, oh I don't know, that lumpy blue sweater, for instance, because you're trying to tell the world that you take yourself too seriously to care about what you put on your back. But what you don't know is that that sweater is not just blue, it's not turquoise, it's not lapis, it's actually cerulean. You're also blindly unaware of the fact that in 2002, Oscar de la Renta did a collection of cerulean gowns. And then I think it was Yves St Laurent, wasn't it, who showed cerulean military jackets? And then cerulean quickly showed up in the collections of eight different designers. Then it filtered down through the department stores and then trickled on down into some tragic "casual corner" where you, no doubt, fished it out of some clearance bin. However, that blue represents millions of dollars and countless jobs and so it's sort of comical how you think that you've made a choice that exempts you from the fashion industry when, in fact, you're wearing the sweater that was selected for you by the people in this room. From a pile of "stuff."

You obviously care about fashion & style if you are reading this blog, but it is kind of fun to think about how your wardrobe has been influenced by designers like Alexander McQueen, or Tom Ford, or Donatella Versace.  Fashion designers at all levels of the "haute" spectrum are constantly on the prowl for inspiration even if they find it from each other or from a not-so-fictitous character like Miranda Priestly.  Personally, I like the thought that the dress I bought off the sale rack at the Gap may have been influenced by Prada, even if it is just the color or the shape of the button.  Not everyone can afford a $3,000 jacket (in fact, most of us cannot) so it makes high-end fashion much more attainable regardless of the fashionistas budget.

Stylishly yours,
DKG
Posted by Dana at 6:44 PM

Dana
I have always had a passion for fashion & style from the time I told my Mom I was tired of her picking out my outfits & that I wanted "cool clothes". I spent some time in the fashion design masters program at the Academy of Art University in San Francisco. Real life happened & I went back to the business world then moved to a small town. I believe that personal style is an extension of who you are, a state of mind & being. You don't have to be a size 2 & live in Paris to be stylish. This is a blog about being a good person, loving yourself, & of course living a fabulously stylish life no matter where you live, your budget, or your dress size. I hope you enjoy my posts as much as I love writing them!